How to identify frequency of HTCC-AB01

How can I find out which frequency they are made for? 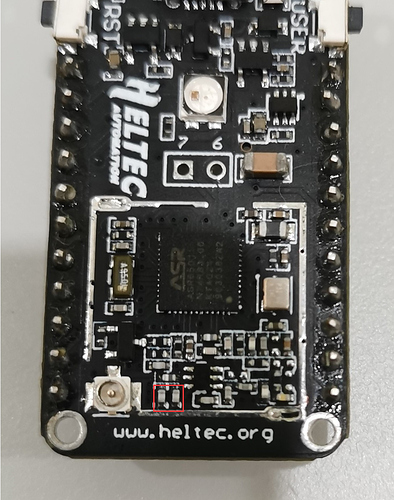 Oh sorry, I was wrong. First, I misread you and meant that two capacitors mean I got a 433, but it’s the other way around. I also opened the working 1th module… it looks exactly the same as the other two regarding hardware:

IMG_3007.jpg1920×409 373 KB
.
#1 can communicate form the air raid shelter to the sensors gateway in our main building 200m away. With number 2 and 3, I can’t even get a connection to the gateway from the lower floor in the same building with exactly the same firmware.
So I did a test now. I used a LoRa 32 as a ping pong base station, a fixed antenna for the cubecells and 5dBm, 868MHz, SF5, BW125, CR4/5 on both sides, distance 2m. These are the results (RX RSSI on the ESP32 side/RX RSSI on the cubecell side):

Number 2 I could not do any test without antenna, as I soldered a 86mm wire instead of the IPEX connector.
So I think antenna switching is broken on modules 2 and 3, but I can’t see anything wrong under the microscope (well, it’s not the nicest soldering, but nothing shorted or open). I drown everything in flux and hit it with hot air. I’ll report back…

Nope, same problem as before. Any ideas? I measured also (with an oscilloscope) the signals at the collector and the base of Q5 as well as Pin 4 and 6 of U2. Everything looks fine…

You can use cubecell No. 1 to do pingpong test with cubecell No. 2 and No. 3 respectively, and observe the experimental results.

@shaffer It’s about the same picture: