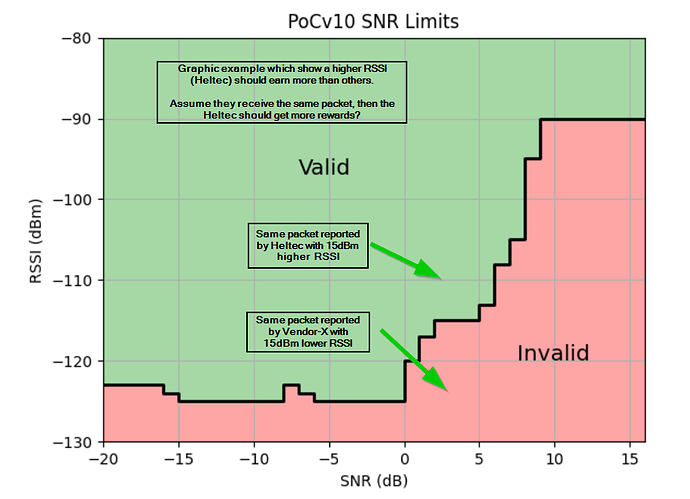 Illustration what I mentioned above, a higher RSSI should give you more valid PoC results. And higher earnings.

@fantasy2 are you’re screenshots the default stock nodes? I don’t believe this earnings, can we show 10 of this good working miners from Heltec?

@fantasy2 added input amplifers on both of these heltec units and he noticed a significant earnings improvement after adding these amplifiers.

Maybe we do not know everything about the POC algorithm.
This is just an hypothesis. What if the algorithm takes into consideration the average RSSI SNR values perceived by all the witnessing hotspots and exclude the ones with extremely different values thinking that these hotspots are gaming?

Heltec need to address the earning disparity issue regardless its clear

Whether it is a long-distance or a short distance, the RSSI is always between -115 and -120, which is more like taking a random number within a certain range… The distance of 900 meters is -115dBm, and the distance of 62Km only becomes -116dBm.

Can you share the link of the two miner @fantasy2 ? Judging from the data listed by @Supporter , I think I am not the only one who doubts you are gaming. If we are analyze the gaming data here, it doesn’t make any sense.

(Many thanks @Supporter for the extensive reply, I will give a longer reply later)

Very short answer:
To prove my point that there is an issue with receiving beacons I made a setup so the Heltec hotspot would receive a beacon at a higher RSSI(-90dBm to -80dBm).

Yes, this would considered gaming, but it is done to just prove a point. Since the signal is amplified the heltec is earning almost similar to other hotspot brands.

Without this amplification trick, the heltec would only make less than 0.2HNT while the other brand would make 1.5 to 2HNT a day on exactly the same location, the same time, same antenna, same cables. And yes, they are located at an exceptional location overseeing a lot of land hence the big rewards.

This performance cannot be blamed on the network. There are simply too many cases and I can turn the performance of the hotspot on and off. A bad performing Heltec device(which seem to be reflected in the RSSI) is simply earning less HNT over a period of weeks compared to other brands.

This test debunks Heltec’s conclusion that their hotspots all earn the same or more compared to other brands.

And I stated this before: some hotspots perform just fine, others are however not so lucky.
How many hotspots did you actually test @Supporter ? One? Or a batch of 4, 8 or 12?

I will reply more in depth to Heltec’s work later.

Most important is to find a solution and I’m happy that Heltec is actively investigating.

This isn’t the only issue!!! I looked at my Lora logs and I was picking up 12 witnesses an hour but non of them were getting registered on the helium network, rssi values were between -95 to -105, my antenna still picked them up and my heltec still logged it in the Lora logs, why were there no rewards from heluim? The helium network algorithm you say!!! Well today I swapped my heltec with a sensecap and surprise surprise I am witnessing almost 19 beacons an hour, getting rewards for all of them!!! Same location antenna and cable, just a straight swap!! Coincidence you say, well I swapped three of my heltec with sensecap, and all three are witnessing between 9-10 an hour!!! Where are my witnesses going??? That is the main issue! We are witnessing according to the Lora logs, packet size 52, but non of them get registered to the helium network!!! Plus you tested your units in a lab!!! We witness according to the Lora logs but the witnesses don’t get registered on the block chain! That is the main issue!!! Where are you sending our witnesses, out of 12 an hour I would expect 3/4 to get rewarded but I got nothing!! Sensecap in the same real world location got me 10/12 an hour!!! Please can explain this issue also! Test you units in real life whilst connected to the block chain and show me the Lora logs with the percentage of registered witnesses on helium!!!

You used the lowest grade Lora module in our devices also!!!
You use the top outlined module while sensecap use the bottom better unit!!! Explain this please!!!

@fantasy2 added input amplifers on both of these heltec units and he noticed a significant earnings improvement after adding these amplifiers.

Regarding the amplifier…I think there are some unreasonable situations.

It is necessary for us to review the relevant knowledge of communication principles first:

In wireless communication, SNR stands for Signal-to-Noise Ratio, the signal-to-noise ratio. The signal here refers to the electronic signal from the outside of the device that needs to be processed by this device, and the noise refers to the irregular signal that does not exist in the original signal. Noise is independent of the original signal and cannot be eliminated. There is no direct connection between the two.

We found some previously analyzed data (the time was about 10 days ago). In the blue box, we can see that the SNR value is negative, and the RSSI at this time is the intensity of the noise. We can think of that’s before installing the amplifier. 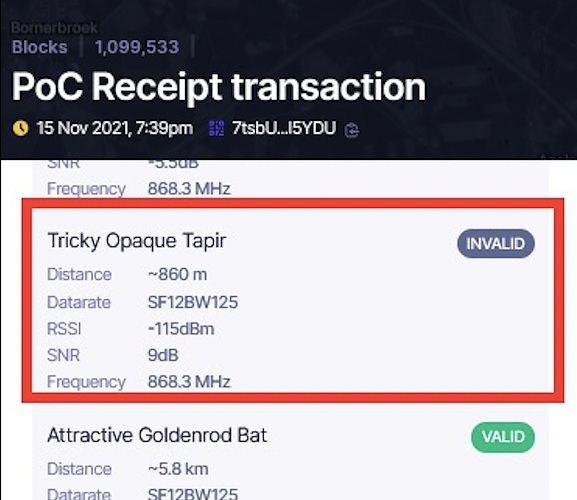 In the recent witness data, we see that the RSSI has become lower. Is this the data after the amplifier has been added? But there are two contradictions: 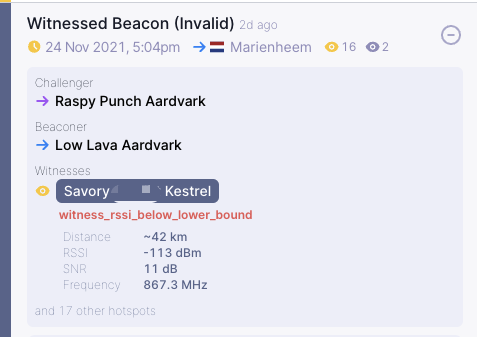 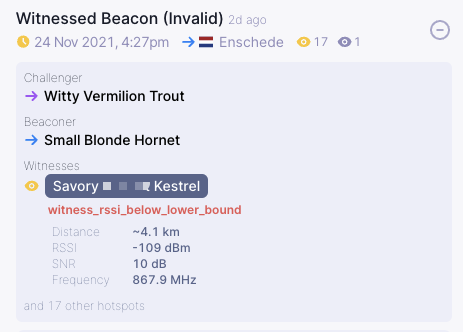 Do you know the amplifier type? Or some parameter of this amplifier? We can carry out further tests.

@Supporter please look into the software defect first. The info from @pgw2021is also shared in my country. There are more 52 size packets in the Lora log which got not processed (whitenesses) by the heltec node. Which means that needs to get priority above the RSSI issue. The defect of processing could be a software issue.

The one with an IP address is HT-M2808, and the one driven by RPI is made by other manufacture.

Sorry for my fault, in the last posted picture, I wrongly chose the RSSIS as the comparison item. Shown in the blue box here (It’s really easy to confuse): 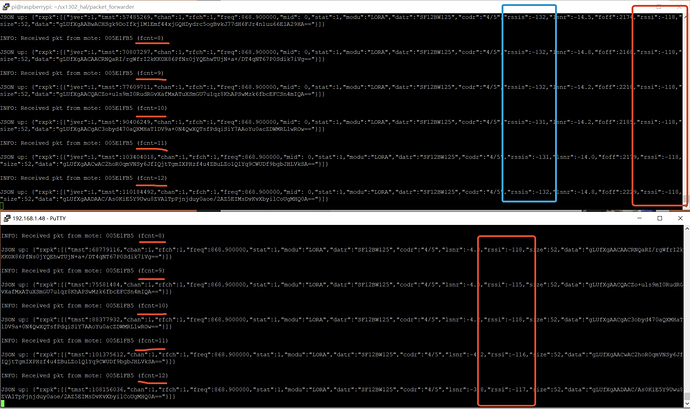 I think many guys have the same experience: did not notice there was an RSSIS

In the experiment, we had shown the RSSI has a difference with some SX1302 based gateway, but not so crazy.

And in the previous experiment, which proved to except the influence of antennas and coaxial wire, the RSSI we measured was within 5dB from the data of other manufacturers, which verified the difference caused by the FEM gain.

The only question is that many people confuse RSSI and RSSIS.

I don’t think we are suitable for this. Although in Helium’s explorer, every hotspot can be seen. It’s just like you are walking on the street. Everyone, including me, may see you. that’s no problem… But if I post your photos in public without your permission, it is obviously not allowed.

Don’t worry, we are keep working on that.

And I stated this before: some hotspots perform just fine, others are however not so lucky.
How many hotspots did you actually test @Supporter ? One? Or a batch of 4, 8 or 12?

We randomly selected about 7 machines from the production line to do the above tests, which are machines in production.

And in the previous experiment, which proved to except the influence of antennas and coaxial wire, the RSSI we measured was within 5dB from the data of other manufacturers, which verified the difference caused by the FEM gain.

@Supporter Im sorry could you elaborate/explain once more what you found in the LAB regarding the FEM chip.

I dont know which amplifier he used and he doesnt want to share this information with the general public, but i think you are already in touch

The rssi value is important and there is an issue but…. My heltec was picking up 12 witnesses an hour on the Lora logs albeit -95 to -105, my point is non of my witnessed beacons getting registered on the chain!!! They were getting directed to another device!!! I hen I put my sensecap in the same spot I was rewarded 10 witnesses an hour!!! 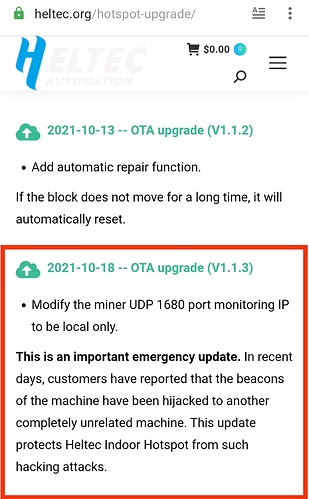 Here are my Lora logs! A lot of 52 packet data but non were sent to the helium network for rewards!

I swapped out the heltec for sensecap and my hotspot is now rewarded with 10 witnesses an hour!!!

no, no. I did it my self. But in general I wrote that this is not acceptable, they should fix this asap or give refund. They cannot say that there is no problem if we clearly see that there are. I have the same issue

I am not an expert on this matter. Can someone confirm this if it is true? If so then sounds like law suit.